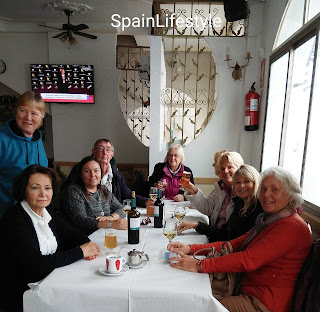 This year our big trip included an agenda that followed up on the great Spanish Renaissance art and architecture that I taught in the Fall Season of classes for 2019.

We were a group of nine and we were road tripping in our usual trusty people-mover called Jumpy from Javea Cars. 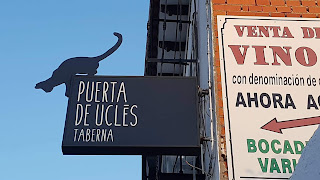 First stop was a spot of lunch at a crazy tavern on the edge of Uclés. Since the town has only 287 inhabitants on its census, the tavern was not busy but they sure knew how to whip us a bunch of delicious salads and hot tapas with beverages all for a super small price tag.

Then it was off up the hill to the Monastery de Santiago de Uclés, which was built by the a religious and military Order of Santiago in 1529, during the reign of Carlos V, Holy Roman Emperor, which is the part in history where the Spanish Renaissance starts.

We first walked around the outside starting at the east wing and marvelled at its rich and complex Plateresque style. Then onto the other side that showed off its later Herrerian style that began in the last quarter of the 16th century. Finally, we entered through an amazing super special and decorative portal in the Churrigueresque style finished in 1735 under the reign of Philip V. 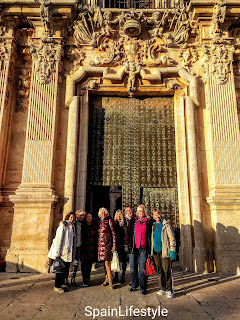 The inside reflected the clean classic Roman lines and themes of centuries gone but updated to reflect the purist of the Spanish Renaissance and specifically the Herrian style of architecture. Hanging from the walls were the large banners promoting the Order of Santiago symbol. 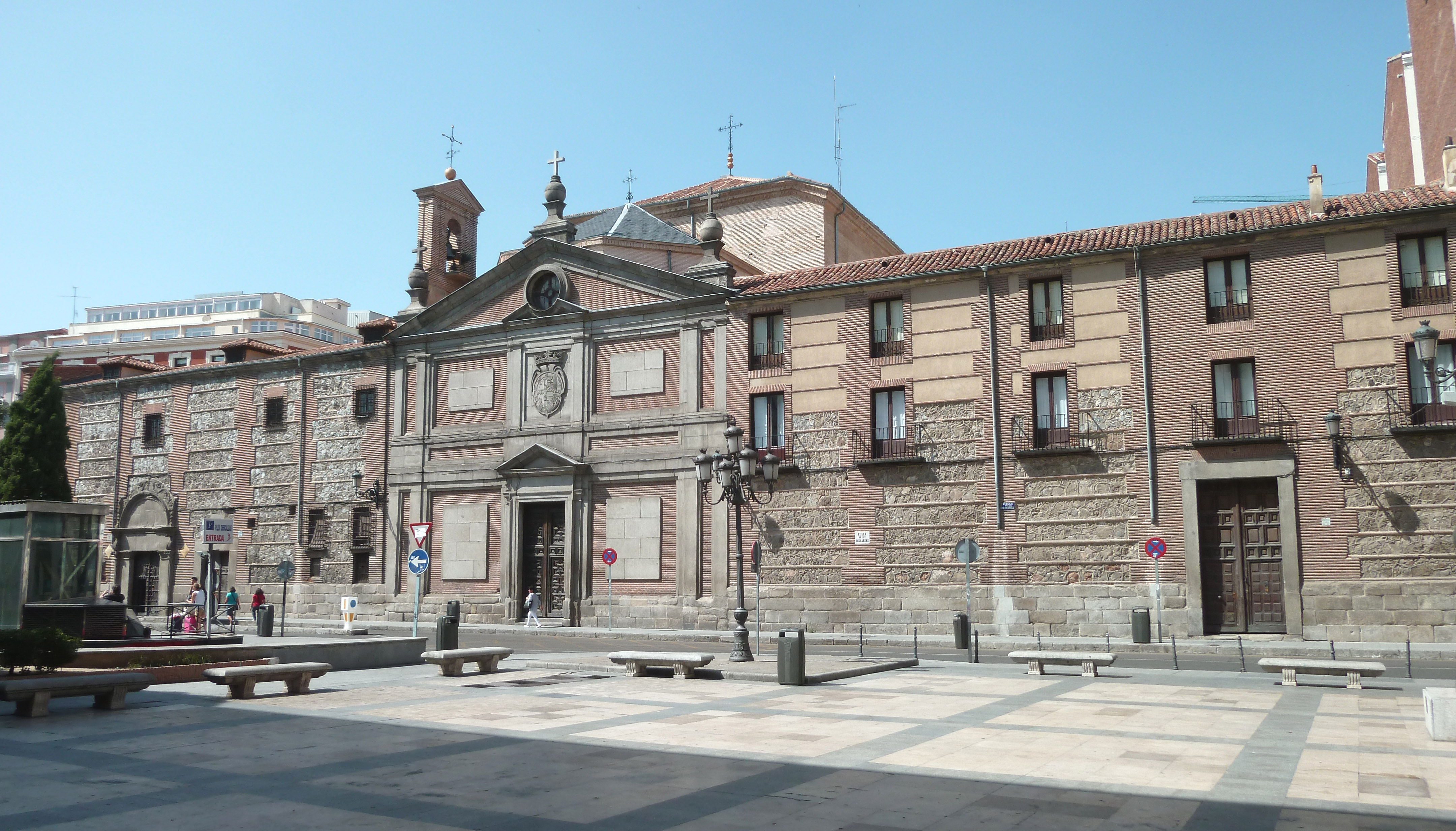 Next morning we were up early to be the first through the Monasterio de las Descalzas Reales, literally the "Monastery of the Royal Barefooted". Keeping with our Renaissance theme, it was important to see the former palace of Emperor Charles V and Empress Isabel of Portugal.

It was their daughter, Joanna of Austria, who later founded this convent of nuns in 1559. While the palace was being converted, the first community of nuns arrived from Gandía and Denia, sent by Francisco de Borja, who became the 4th duke of Gandia. It was a great connection for many student who have been to the Borja palace and museum in Gandia.

Throughout the remainder of the 16th century and into the 17th century, the convent attracted young widowed or spinster noblewomen. Each woman brought with her a dowry. The riches quickly piled up, and the convent became one of the richest convents in all of Europe.

It is a shame that no photos were allowed because the great main staircase was over the top. It was completely wall painted with all types of scenes. There is even a royal balcony where sits Felipe IV and his wife Mariana of Austria with the infanta María and prince Felipe Próspero.

This building was full of priceless art such as the masterpiece Caesar's Money by Titian and exceptional tapestries woven to designs by Rubens, as well as works by Hans de Beken and Brueghel the Elder.

I did find a video that has many of the attractions and included it on the photos page. If you click on the bottom right of the video, it should load up to be a full sized video.

We were very lucky to see a very rare collection of handmade royal dolls simple because that it was Christmas season as this room is normally never opened. Some dolls were made from wood, some porcelain, marble and even ivory. Many of the garments were stitched with real gold thread too! 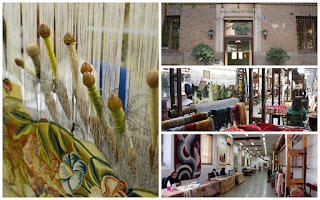 
NEXT we cabbed it down to the Royal Tapestry Factory (1720) on the opposite side of town by the Puerta de Santa Bárbara, a gate on the northern side of Madrid.

The factory was founded by Philip V after Spain lost its Belgian territories, and their tapestry workshops, as a result of the Peace of Utrecht. The project was one of a number of mercantilist initiatives undertaken in the eighteenth century in the Madrid area to supply luxury goods. Another example was the Real Fábrica del Buen Retiro porcelain factory.

Because my students had studied the works of the painter Francisco Goya at the end of the Spring term, and Goya's first job was drawing ideas for tapestries for the weavers in this factory to be displayed at the palaces El Escorial and El Pardo, I thought this place would be interesting.

Sadly, again, we were not allowed to take photos and this tourist attraction had only Spanish speaking guides and no audioguides, which come in a multitude of languages. Not only that, the guide spoke super fast making it hard for those of us who do understand, plus we got in with a group who debated with the guide causing total chaos!!

Anyway, we finally made it around and what we say was interesting but nothing like I had imagined. 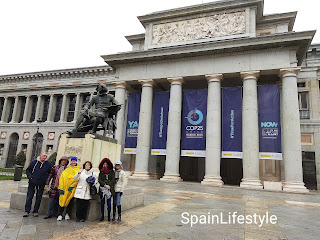 NEXT we strolled up to the famous Prado Museum, which I know and love.
First we enjoyed the Prado's cafe shop before heading directly to the paintings of Jusepe de Ribera, who we were studying just before coming on the trip. It was a highlight to finally see his painting of the Bearded Lady, which was before in a private collection in Toledo.

I also took my students through the grand hall to see all of the paintings by Diego Velázquez where I explained his masterpiece 'Las Meninas' again... maybe for the 50th time in my life? Then we saw many of Goya's royal works before heading back to the cafe shop. Some of my younger students zoomed around to see the rest of Goya's works, especially from his Tapestry Factory days!

NEXT we made our way to the Mercado de San Miguel, which is a heavenly tapa eating emporium. There we ate and drank before going next door to the Plaza Major. Sadly, it started to rain, which put a damper on our efforts to explore the massive Christmas Market in the center of the square.

NEXT we drove from Madrid up into the foothills of the Sierra de Guadarrama to the village of San Lorenzo de El Escorial. Here we found our next hotel and unloaded.

We were opposite the most important architectural monument of the Spanish Renaissance, namely the Palace Complex of El Escorial (1563 - 1584). 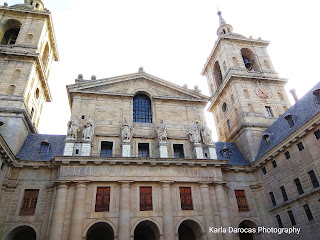 The project was the desire of Rey Felipe II, who wanted a building that would be the burial place for his father, Holy Roman emperor Carlos V, and a Hieronymite monastery, as well as Royal palace.

The first architect, Juan Bautista de Toledo, designed the ground plan on a gridiron scheme, recalling the grill on which San Lorenzo, the patron of the building, was martyred.

Next, Rey Felipe IIs favourite architect, Juan de Herrera took up work on the project and gave it a uniquely Spanish Renaissance style.

The interior of the Escorial was decorated by many notable Spanish and Italian artists of the 16th and 17th centuries. We got to see some of the artists that were studied in classes such as El Greco and Jusepe de Ribera as well as the most important collection of paintings by Europe's top Renaissance and Baroque artists donated by the crown.

Upon entry, were were greeted by a set of Old Testament kings on the façade of the basilica, which included in the center King David and Solomon.

Nowhere else in Renaissance art does architecture, painting, and sculpture come together in a composition of such unified splendor in which every detail appears as a necessary part of the whole.

Later rulers modified El Escorial, although it still keeps its unity to this day. Philip IV completed the Royal Pantheon, a chapel containing the bodies of Spanish kings, in the 17th century.

There have been some losses to its collections because of fire and pillage, but El Escorial remains the most complete and impressive monument of the later Renaissance in Spain. Today, the Escorial is a UNESCO World Heritage Site and it is one of Spain’s most visited landmarks.

Again, we were not allowed to take photos, so I have found a video that will give you an idea of what we encountered.

We went back to our hotel and had a little relax before heading into the charming village, which was decorated to the maximum for Christmas. Every turn had lights and life size figurines. It was a really nice surprise. 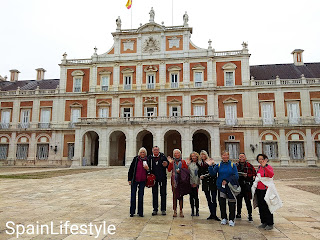 NEXT we headed south all the way to the bottom end of the province of Madrid to experience more Royal Renaissance at the Royal Estates Aranjuez. This piece of paradise belonged to the Crown of Spain since the times of Philip II in 1560. Until 1752, only the royalty and nobility were allowed to dwell in the town. The Cultural Landscape of Aranjuez was declared a World Heritage Site by UNESCO in 2001.

Like the Monastery complex of El Escorial, this site was initially designed by Juan Bautista de Toledo and completed by Juan de Herrera. Inside, the basic structural composition still bares witness to the clean classical lines and arches of the Renaissance period, however much of the decor was renovated in the Romantic and Rococo eras of Queen Elizabeth II.

It is such a shame that we were not allowed to take photos inside but we did have a chance to snap some pics outside. Again, I have found some videos.

All of the rooms in the Palace were opulent and dripping with expensive tapestries, sculptures, paintings, furniture, rugs and more. The Porcelain Room was really fascinating as well as the Arabic Room, which gave you an idea of how the Alhambra Palace must have looked in its day when all the tile work was painted in polychrome.